We attempted the same morning routine from day two. Apparently the Wawa couldn’t handle the demand of festival goers.  They were out of eggs and bagels and other breakfast treats!  People were pissed that there were no cinnamon raisin bagels left, it was getting serious.

We remembered to take specific note of where were parked our car this time so we could avoid wandering aimlessly in the parking lot for 30 minutes.  They were being a lot more strict with checking bags this day and I was concerned they were going to confiscate my spray on 100 SPF sunscreen that had been saving my life the past two days.  Luckily, I made it through inspection! 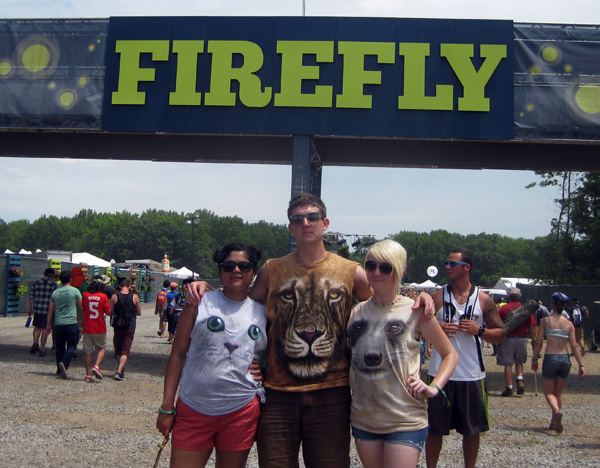 Before going to Firefly, I had been listening to a playlist on Spotify that had all the artists playing the festival on it.  The Last Royals were a band I discovered through this playlist.  They were the first band playing at the Porch stage today, so I headed over there as soon as we got into the grounds and I got a front row spot!  A light rain started before they came out on stage.  The festival security had to cover the speakers with huge plastic sheets.  They only have the one album, Twistification, so they played all my favorite songs including “Good Day Radio“, “Crystal Vases“, and they closed their set with my absolute favorite, “Only the Brave“.  I mean, you obviously know Katy Perry is going to play “Teenage Dream” because it’s a single, but with smaller indie bands I usually have no idea if they’ll play the songs I dig most.  I loved that during one of the slower songs, “All Over Again“, the drummer was singing along.  I think it’s pretty adorable when band members without a mic sing to themselves. 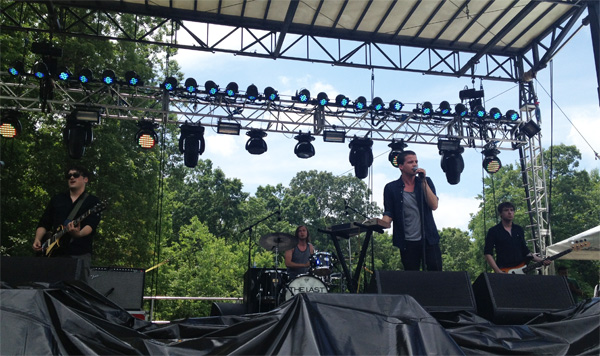 I met back up with Tyler and Jithu to check out the end of Haim’s set.  They both decided they’re a less pretty, girl version of Hanson since they’re three sisters.  I might have agreed with them.  They were intense live. I liked it and was simultaneously terrified.

We didn’t stay for their whole set so we could go check out LP.  She was such a tiny human in an equally tiny blue three piece suit with big hair and a powerful voice.  I had only listened to her a bit before Firefly, but I was really impressed with her.  Also, during her set it decided to downpour for a few minutes.  Luckily for LP, she was under the protection of the stage, and we were not.  She did have some wise incite on our perspective though, “This is better than being in a fucking port-a-potty.”  You were very right, LP, it was definitely better than being in a fucking port-a-potty, unless it was one of the ones by the Porch stage, because, let me tell y’all, those ones were spotless!  While LP was closing with “Into the Wild“, we headed over to the Lawn stage for Matt and Kim. 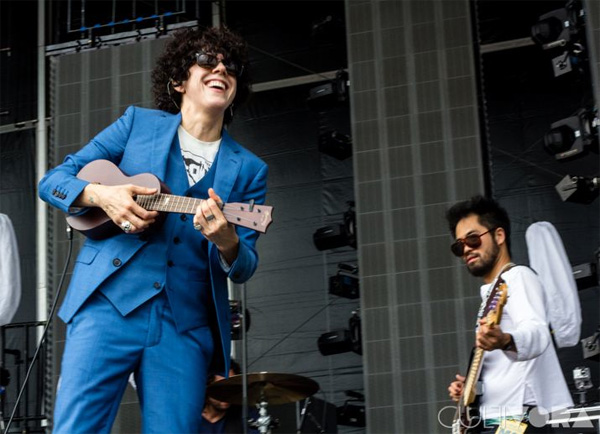 Holy moly, you guys!  Matt and Kim are nuts live in the absolute best way  possible!  Matt introduced Kim as his partner in crime and partner in sex.  The entire time Kim was drumming she looked like she was having the most fun ever!  She would get super into it and stand on the bass drum while hitting the symbols or snare.  They had confetti sticks and balloons they threw out into the crowd to have tossed in the air when the the beat dropped.  It was pretty rad.  It was still rainy during the beginning of their set.  Matt teased “Daylight” on his keyboard and the rain pretty much stopped.  When they ended up actually playing “Daylight” later in their set it was an awesome afternoon dance party.  At one point Kim was crowd surfing, only she was walking on the people’s hands and dancing the entire time.  I would have been terrified if I were her, but she is fearless.  Matt and Kim are spectacular performers and definitely worth seeing live! 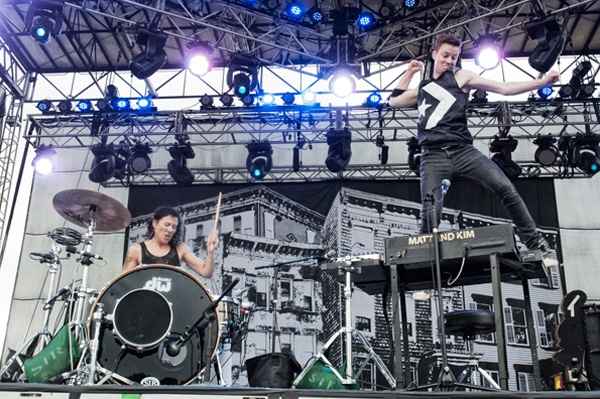 The Lumineers ended up having to pull out of the festival for health reasons and I’m kind of glad they did.  Looking at the line up I was torn between seeing The Lumineers or Capital Cities, so after removing The Lumineers the decision was made for me!  Capital Cities played at one of the smaller back stages and they ended up being one of my favorite bands from the festival.  All the guys were rocking matching Capital Cities jackets in the same style as the Pink Ladies from Grease.  They had simple choreographed hand motions that went along with their song “Chartreuse” and later taught the crowd the Capital Cities shuffle.   Their trumpet player adds a lot of character to their live electronic pop sound.  All their songs have a quirky charm and you can really see that the guys love what they’re doing and take it seriously even though they’re singing light hearted songs like “Farrah Fawcett Hair“. The crowd went crazy during “Safe and Sound” and then they ended their set with a cover of Madonna’s “Holiday“.   I am on the prowl for when they (hopefully) tour Pittsburgh. 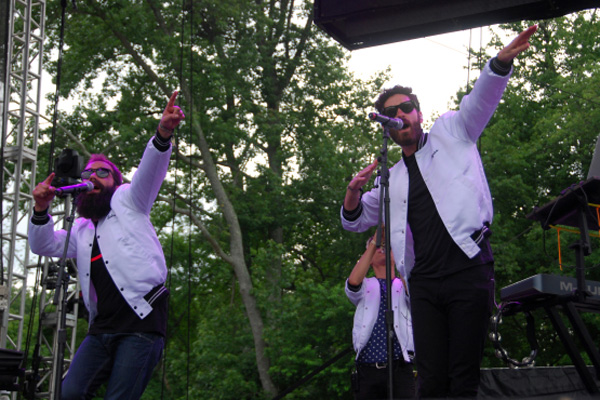 Next Tyler and I went to the Firefly main stage to check out Passion Pit, while Jithu took a nap since she’d already seen them.  Passion Pit was probably one of the top five bands that convinced me to go to Firefly.  I was, and still am, obsessed with Gossamer.   Early on in the set they played “Carried Away” and I was happy because that was my #1 song that I wanted to hear.  Soon after that, Michael, the lead singer, told us his allergies were bad and he was struggling, but he wasn’t going to cancel this year.  He played a few more and you could definitely tell he was in pain, but he kept his energy up and kept trying.  During “Constant Conversations“, another one of my favorites from Gossamer, he completely blew out his voice.  He then went on to tell the crowd he was going to do his best to get through the songs everyone wants to hear and asked for help from the crowd to sing along.  Michael was still able to retain good spirits and energy as he went into “Take a Walk” and “Little Secrets“. He could hardly make any of the falsetto notes out for “Little Secrets” and he was trying so hard!  For the closing song, “Sleepy Head“, he just got down in the crowd and basically started a huge dance party. I seriously respect his determination to try to give the best show he could even though it was a less than ideal situation for him. 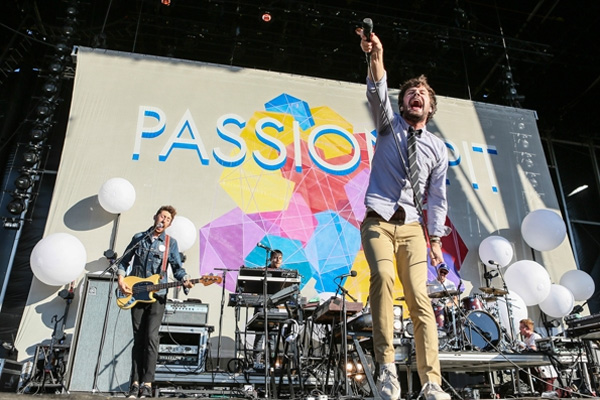 Passion Pit having to cut their set short actually worked out in our favor.  Passion Pit was supposed to end the same time Vampire Weekend started.  This gave us more travel time to get through the massive crowds and meet up with Jithu.   Sometimes I forget how adorable Ezra, the lead singer from Vampire Weekend, is. I swooned a little bit and I am not ashamed.  Another dude in their band was wearing a cowl neck sweater?!  I couldn’t really get over how that was a good choice for an outdoor festival in June, but they’re New England prepsters, so I guess that’s just how they live their lives.  I loved seeing “Unbelievers” and “Diplomat’s Son“.  They got a call and response going for “One(Blake’s Got a New Face)” and played “Cape Cod Kwassa Kwassa” and “Campus” which, again, transformed me back to ’08 and WXJM.  Y’all, 2008 was a good year.  Seeing Vampire Weekend at an outdoor venue is the perfect way to experience their music live.  The only way it might have been enhanced would be if their set was on the beach in Maine. 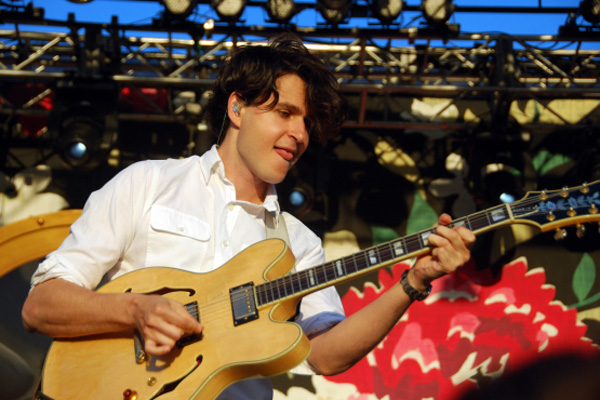 Foster the People were the final band of Firefly.  All of us were feeling pretty neutral towards them.  We wanted to check them out, but didn’t need to try to get that close to the stage.  I had already seen them a couple years before and they haven’t put out any new albums since then.   I’m sure this happens to most people, but when I think about Foster the People I automatically only think of “Pumped Up Kicks“.  I totally forgot how much I loved the entire Torches album! Songs they played that I forgot existed were “Call It What You Want“, “Don’t Stop“, and “I Would Do Anything For You“.  Foster the People also have a ridiculous light show when they play live.  We didn’t stay for their entire set, but after seeing the bit we did I get why they were the headliners. 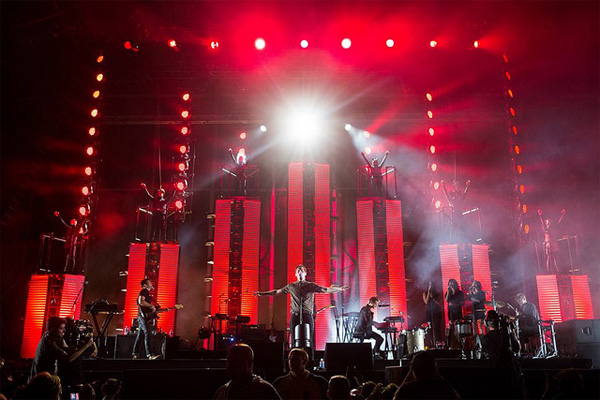 I  think my first adventure at an outdoor music festival was a great success!  Seeing so much incredible music in such a short amount of time has just made me love and appreciate live music more than I already did.  Firefly, I hope to make an appearance in 2014. 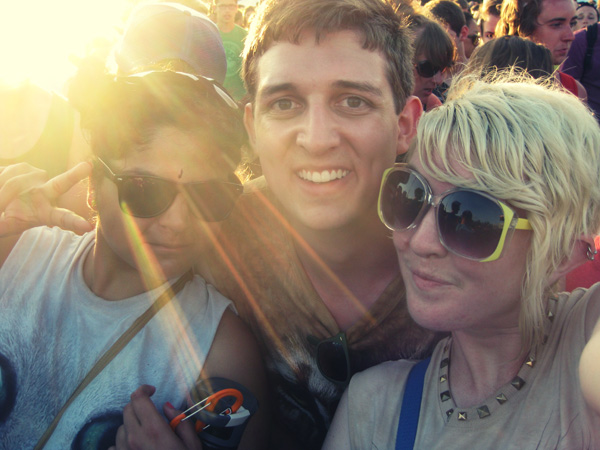